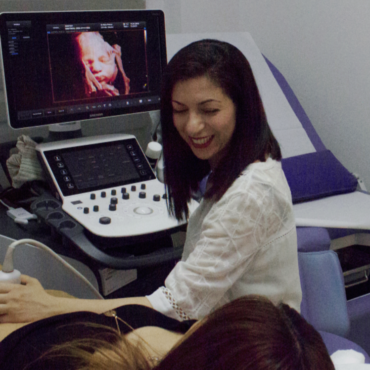 Dr. Petrou, has graduated from the Lyceum of Apostles Peter and Paul in Limassol with
honours ( 20/20 ) in July of 2002 and through Pancyprian examination for High School
students, she held a position in Athens Medical school of the National and Kapodistrian
University of Athens. She graduated in 2008, Bachelor degree with Honours (Grade:
Excellent).
After graduating from Medical school, she succeeded the oral and written yearly
examinations for trainees and was offered the place of Ob/Gyn trainee in the hospitals of
Cyprus. She worked as a junior trainee in General Surgery Clinic in Limassol General Hospital
for one year. In March of 2010, she began the specialization in the field of Obstetrics-
Gynecology in Limassol General Hospital. The last two years of her training she worked at
Archbishop Makarios Hospital in Nicosia, that is a referral hospital for Gynecology and High
Risk pregnancies.
During her training, she moved to London. There, she was trained in the field of Fetal
Medicine at Harris Birthright Research Center of King's College Hospital, working as a fellow
sonographer at Kings Hospital and UCLH, for Cypriot Professor K. Nikolaides. During and
after her post-graduate training she attended numerous courses, seminars and workshops in
Cyprus and abroad, in the field of Laparoscopy and Fetal medicine. In May of 2014 she
fulfilled her training and after oral, written and practical examinations she held the title of
Ob/Gyn doctor in Cyprus.
In September 2014 she moved in UK, for her post-graduate training in the field of Minimally
Invasive and Robotic Surgery at the ICENI Centre, in collaboration with Anglia Ruskin
University. Her major field of interest was endometriosis. She also worked as Ob/Gyn Doctor
for NHS, in Chelmsford Hospital, Essex. At 2015, she was awarded with MCh (Master in
Surgery) in Minimal Access and Robotic Surgery, with her dissertation focusing on bilateral
endometriomas.
From 2016, she is a member of the Limassol Medical Association and works in Cyprus as a
private doctor.
She track number of conferences in order to remain up-to-date with new developments in
the field of gynaecology, focusing her practice in gynaecological and obstetrical ultrasound
diagnosis.
From 2020 she is associated with YGIA POLYCLINIC.

Manage Cookie Consent
To provide the best experiences, we use technologies like cookies to store and/or access device information. Consenting to these technologies will allow us to process data such as browsing behavior or unique IDs on this site. Not consenting or withdrawing consent, may adversely affect certain features and functions.
Διαχείριση επιλογών Διαχείριση υπηρεσιών Διαχείριση παρόχων Διαβάστε περισσότερα για αυτούς τους σκοπούς
View preferences
{title} {title} {title}
Scroll To Top