Specialist Cardiologist MD, Fellow of the European Society of Cardiology 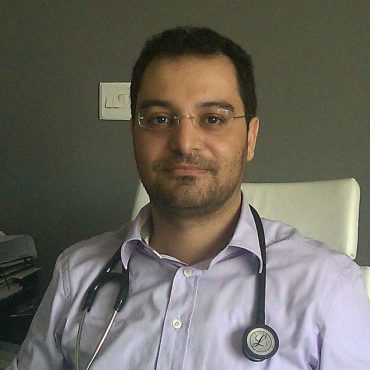 7.2010: Granted the title of Specialist in Cardiology after succeeding the national Cardiology examinations in Thessaloniki – Greece with honors.

20.09.2006-20.01.2008: Training in Cardiology as a trainee doctor at the cardiology Department of Limassol General Hospital in Cyprus.

20.9.2004 – 19.9.2006: Training in Internal medicine as a trainee doctor at the Internal Medicine Department of Limassol General Hospital (Cyprus).

1996-2002 : Graduated from the Medical School of Aristotelion University of Thessaloniki – Greece.  Scholarship by the Scholarship State Foundation of Cyprus.

Participated as a co-ordinator in a survey of the Open University of Cyprus regarding the compliance of doctors with the current European and AHA Guidelines on several issues.

Member of the humanitarian organization “Medicines Du Monde – Cyprus”, head of the mission to aid the people of Sri Lanka after the tsunami disaster in 2004, and in Kashmir- Pakistan after the earthquake disaster in 2005. Head of the aid mission in refugee camps in Chios (Greece) and Eidomeni (Greece) in 2016.

Co-ordinator and cardiologist of the “Medical Office of the poor” in Cyprus, an office set by the volunteer doctor of Cyprus to give free medical advice and treatment to the poor.

Manage Cookie Consent
To provide the best experiences, we use technologies like cookies to store and/or access device information. Consenting to these technologies will allow us to process data such as browsing behavior or unique IDs on this site. Not consenting or withdrawing consent, may adversely affect certain features and functions.
Διαχείριση επιλογών Διαχείριση υπηρεσιών Διαχείριση παρόχων Διαβάστε περισσότερα για αυτούς τους σκοπούς
View preferences
{title} {title} {title}
Scroll To Top